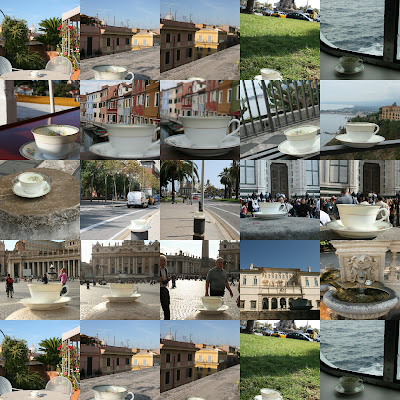 Each cup of tea represents an imaginary voyage.

My teacup traveled with me through Europe. It was tucked into a little carry case and sitting in my backpack. At each stop along the way it made an appearance, receiving notice by those around. I could only imagine what it would have been like to take tea with the pope or an aristocrat in Pompeii. The pleasure was mine to imagine. Imagine with me having tea on a voyage. What kind of tea would you put in that cup? A simple cup, but with a story to tell.

Posted by Marilyn Miller at 7:44 AM

My tea choice would be something mild and golden brown in color with a soft sweetness. I better you could give me some specific recommendations, Marilyn.

I love the collage of photos of your travelling teacup!!! I don't take tea with me when I travel outside the USA. I would definitely find "local" teas to purchase and put in that teacup.

What a fun, fun thing! And were you using one of your fabulous prototypes for the tea cup carrier? I do love mine!

Yes, I was using a prototype of my future Marmalady's teacup carrier. It worked great.

What memories your special teacup holds for you, Marilyn. And what a great idea...I love it!
When I saw the photo of the teacup in your Pompeii photo, I wondered if you had your small thermos and really drank a cup of tea while there, but having a photo of the teacup there, as well as the other places, is a stroke of genius! Thanks for the journey through your teacup.

Marilyn, absolutely SUPERB idea about the Traveling Teacup! I just love it! Very clever! I have really, really enjoyed your series of photographs. Thank you for sharing! Here's one of my favorite travel quotes for you: "We live in a wonderful world that is full of beauty, charm and adventure. There is no end to the adventures we can have if only we seek them with our eyes open."

What an awesome post! I love that little teacup in all those places! Did you have the same kind of tea at each place, or did you try something native to your locale? Your traveling teacup reminds me of the traveling bears that have been so popular!

What dedication to remember to pose your teacup for photos during your trip!